In Many ways Alice Cooper’s 16th studio album Constrictor released in 1986 was a new beginning for the rock God. His two previous albums Zipper Catches Skin and DaDa had failed to resonate fully with fans and Cooper for the first three years of the 80s was in his own personal blackout of drugs and alcohol. To this day the rocker can’t remember recording those albums. By 1983 it was time for a break and Warner Bros had also ended their association with him. Though Cooper by the end of that year had sorted his personal problems out and rid himself of his demons, it was fair to say that he seemed to be heading back to obscurity. For the next few years Cooper did just that, although he did star in a video for Twisted Sister’s the deliciously titled ‘Be Chrool to Your Scuel’.

There was talk in the Cooper camp as early as 1985 that he would return with the sequel to Welcome to My Nightmare which was celebrating its tenth anniversary. There was also talk that Cooper would recruit one Joe Perry, yes Joe Perry of Aerosmith fame. Both rumours would indeed come true but that was much later in Cooper’s discography.

A year later after what seemed like an eternity for fans, Cooper returned with Constrictor. Cooper tapped up guitarist Kane Roberts for the record. Roberts would dress up like Sylvester Stallone’s Rambo character when playing shows and with the glam period at the time, men with long hair and ribbed muscles Roberts was perfect for Cooper’s set up. Producer Beau Hill who had helped Ratt with their first record suggested that Kip Winger was brought in, the bassist would later go on to form his own band Winger a year later.

In truth Constrictor was not a huge departure from Cooper’s early 80s records that had failed but fans were quick to see that Cooper had reinvented himself at least personally and was focused. Plus for the tour staple songs from the record were metalled up so to speak and always sounded heavier.

Still fans instantly caught on to tracks such as ‘Teenage Frankenstein’ and ‘He’s Back (The Man Behind the Mask)”. Indeed there was to be a neat tie in when Cooper teamed up with the makers of Friday the 13th to score three tracks for that summer’s movie which was the often loved Friday the 13th Part VI: Jason Lives. Cooper added ‘Hard Rock Summer’ as the third song although it doesn’t appear on Constrictor. But Cooper’s teaming up with an instantly recognizable horror franchise was lightning in a bottle. Though he didn’t star in the movie a video was made for ‘He’s Back (The Man Behind the Mask)” which starred Cooper and some actors from the movie including Jason Voorhees played by CJ Graham. Cooper had always intertwined his live shows with the macabre and this made perfect sense, it was a no brainer.

The record charted at No.59 on the Billboard chart making what appeared to be just a splash in the ocean, but considering his last two records barely scraped the top 200, Cooper was heading back in the right direction.

Constrictor ended up being a huge crossroads for Cooper- had that record failed had he not teamed up with Mr Jason Voorhees and had he not got the right guys in at the time in Roberts and Winger, the future could have been very different. Instead it launched a springboard and gave Cooper a second bite at the apple, and he never looked back. 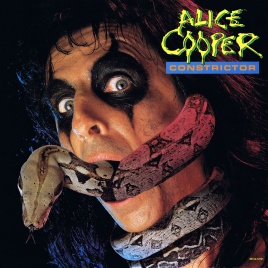