Practice What You Preach

The summer of 89 was winding down when I first picked this album up and I must say the third studio release from Bay area thrashers Testament proved to be a major step up. Firstly, the lyrical content was all about politics and societal issues; placing more emphasis on subjects like freedom of choice, political corruption, hypocrisy and the effects of greed and avarice. The album also provided a more mature sound, toning down the frenetic thrash of the first two releases in favor of streamlining their sound; but still retaining some of their youthful ferocity. The title track became a hit and was heavily featured on MTV, along with “The Ballad”. Many of these tracks have become a continual staple in their live shows, all except “Confusion Fusion” which has reportedly never been played live.

Practice What You Preach received favorable reviews at the time, and in October 89 they embarked on a tour with Annihilator and Wrathchild America. The second leg of the tour took place January 1990 supporting both Mortal Sin and Xentrix. The band would also go on to perform with Savatage, Nuclear Assault and Dark Angel later that year. The album entered the Billboard charts at 200, peaking at number 77 and remained on the charts for 12 straight weeks. They would later go on to record Souls of Black shortly after.

Some of the track highlights include: “Practice What You Preach”, “Envy Life”, “Blessed in Contempt”, “Sins of Omission” and “The Ballad”. I am giving this is a respectable 9 out of 10 and I will say this is a pure thrash masterpiece.

In 1990, young thrash stalwarts Death Angel released their third effort to much acclaim on the band’s first and only major studio recording. Most critics dubbed this release their finest moment and I must say this to be fairly accurate for the time. The music is polished and mature sounding for a thrash band finding their place in the pantheon of thrash bands of the period. The album produced strong singles with “Seemingly Endless Time” and “A Room With a View”, getting tons of play on MTV’s Headbangers Ball. For my money’s worth, the songs are catchy and more controlled than the band’s previous two efforts and much of this should be attributed to the guidance of veteran music producer Max Norman.

Unfortunately, tragedy would strike the band later in the year, when drummer Andy Galeon suffered a critical injury when their tour bus crashed, halting the remainder of the band’s tour. In fact Andy was out of action for more than a year, prompting singer Mark Osegueda’s exit from the band and effectively ending Death Angel. The band would later reunite in 2001, supporting Chuck Billy’s (Testament) Thrash of The Titans benefit concert and that would prompt the band’s proper reformation for more studio recordings and touring, continuing into the next decade.

As for the some of the best tracks on this release: “Seemingly Endless Time”, “Veil of Deception”, “A Room With a View”, “Stagnant” and “Disturbing the Peace” are all solid efforts. I’m giving this release a substantial mark of 9 out of 10. 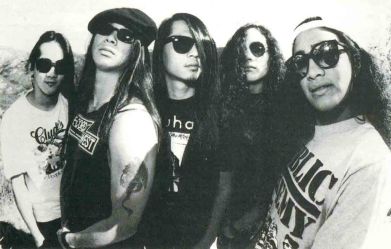