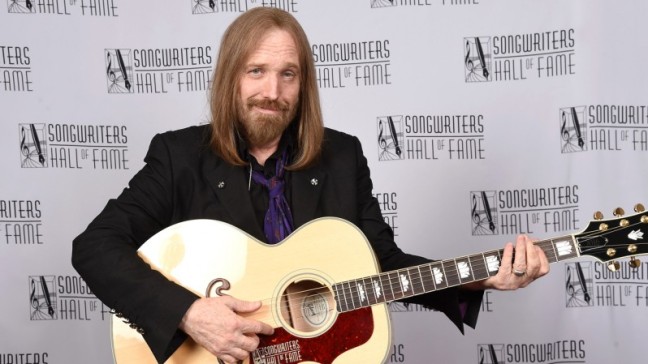 He wasn’t a metal guy, or even prog or hard rock.  Just simple, rock songs that simply rocked my soul. His lyrics could make you learn to fly, or break your heart to pieces.  That’s the magic of Tom Petty.  Blue collar, story telling, straight forward rock n’ roll songs.

Back in  November, 1982, the release of Long After Dark, I had a spiritual, musical birth.  I had grown up listening to The Eagles, Chuck Mangione, Pink Floyd, Queen, Led Zep, assorted Christian artists like Larry Norman , Randy Stonehill, and John Fisher.  But what I was hearing was more gritty, raw, with Bob Dylan style vocals.  It was magnetic.

Listening outside my big brother’s bedroom door I heard a magical sound that pulled me closer to take a longer listen.  I heard the words, “You got lucky, babe, when I found you.” being sung, followed by a wobbly sounding guitar solo.  I peeked in to see the red album cover with a dude and a guitar on the bed.  I read the name, Tom Petty, but it was all I could read.  Being as shy as I was, I didn’t ask to be let in, but stood outside the door listening to the wonderful strumming and a beat that that made my heart warm.  I had to hear more.  “I have to find out who this cat is!” I told myself.  So I set off to find this Tom Petty character.

Once before, have I ever been stricken by an artist that I had changed my life.  The first being Johnny Cash, who made me ditch light for darkness, and Tom Petty who blew my imagination wide open.  It wasn’t just music, it was narration, it was Tom at my bedside telling me a bedtime story of having a “Change of Heart” and being led “Straight into Darkness”.  It was emotion, it was elation, it was heartbreak, sadness, comedy, and tragedy, tongue-in-cheek, and serious business.

As the years went by, my love for his music grew.  I wrote a song for my wife and it has hints of “Here Comes My Girl” and “Time” by Pink Floyd.  My daughter was three when she heard her first Tom Petty Song.  It was “Runnin’ Down a Dream” playing on the radio, and she said, “I like that song!”  When I asked her why, (as I always did when she liked a band or song) she said, “I like the way he sings ‘The rain was unstoppable”.  I knew right then that he touched her soul too.  We would listen to Petty all the time.  She loved singing, “You Don’t Know How It Feels”… My wife didn’t think it was a good idea hearing her daughter sing, “Let’s get to the point, let’s roll another joint…” I had to agree.

My big brother gave me the Anthology CD’s a few months back.  He handed me the folding, cardboard jewel case, and I stared at it and just wept as I embraced him.  To be given a gift of music is magic, but when the title reads “Tom Petty”, it’s an emotional ordeal.

No one writes like Tom Petty.  No one can rip your heart out of your chest and then put a brand new one inside like he can.

To me, he had the best band behind him laying down simple solos, infectious grooves, and slick backing vocals.  There was nothing flashy about him or The Heartbreakers.  Humble guys dishing out soulful tunes.

Every memory I have when there was a Tom Petty song, is a happy one.  Except today.  Today, October 2, 2017, I died also.  The second man who saved my soul was called home to the first Man that saved my soul.

Thank you, Tom Petty.  Without your music, I don’t know where my soul would be.

My heart and my forever gratitude goes out to the Petty family.  I never knew Tom, but he knew me.