Firepower has been out for a few weeks now and word has spread like wildfire over the net; best album since Painkiller most would argue. Those are some lofty words to repeat out loud, and I will admit to not being among those repeating this mantra. But once I gave this release a few spins I quickly changed my tune. I found the songs on a whole burn into your brain forcing obsessive returns to this album over and over.

The album feels like classic Priest – with blazing guitar leads and the continued roar from one of the greatest metal frontmen of all time: Mr. Rob Halford. Even the album title ‘Firepower’ is appropriately earned here, as the band forges ahead with 14 tracks of metallic bliss and I do mean bliss. The opening salvo begins with the title track and it unleashes an array of razor sharp riffs and a hard driving tempo. I can guarantee your fists will be waved high and pumping like mad. When “Lightning Strikes” erupts, the high energy continues as Rob tears it up right at the start of the song, and daring his band mates to keep pace. The riffs are tasty and the chorus is very infectious; I simply love this song!

“Evil Never Dies” is a catchy number that I keep coming back to again and again. Rob delivers a sinister edge to the vocals and Ritchie Faukner and Glenn Tipton provide the firepower. “Never the Heroes” slows down a bit, but it still sounds heavy as fuck. When “Necromancer” starts up, the relentless pace hits hard and I swear this could have been on Painkiller. Faulkner and Tipton work in harmony with the leads, reminding me of that classic 80’s era of Priest.

But not every song is a winner. “Children of the Sun” reminds me of modern Metallica and “Guardians/Rising from Ruins” slows down the proceedings. I will admit the chorus is catchy as hell, but for whatever reasons I couldn’t help but think this is sort of in the Metallica vein of current song writing. You shouldn’t worry though, because this dip in the album is short lived as “Flamethrower” grabs you by the collar and doesn’t let go. I was bedazzled with a catchy chorus and some fast and furious licks from the boys, bringing back that classic metallic sound to the forefront. “Spectre” is a curious number providing tons of grooves, but adding on heaping amounts of meaty riffs to drive the song and chorus.

Songs like “Traitor’s Gate” fall into that familiar Priest pattern: harmonious guitars and driving bass and it won’t disappoint your ears. “No Surrender” is a prototypical sing-a-long Priest number and “Lone Wolf” explores the heavy groove to guide the song, but maybe not to the success I would like it to be. The riffs are bluesy at best and it’s probably not going to be one of my favorite numbers on this album. At least “Sea of Red” is a solid ballad to close out the album.

Overall, I have come to the conclusion of two things: Andy Sneap and co-producer Tom Allom has greatly helped to improve the metallic crunch on all fronts. The guitars are more pronounced here and there is a consistent beefy tone throughout. This was lacking a bit on the previous release “Redeemer of Souls”. The second big proponent here is Ritchie Faulkner’s emergence on guitar and becoming a fully integrated member of the core sound. He slots in nicely beside Glenn Tipton and has helped to rebuild that classic one-two punch we have all grown to love over the years. I’m not sure he found his footing on Redeemer, but here you can tell he’s brought some new life to this band with those incredible licks.

Firepower is not Painkiller, nor will it ever be for me. But you can bet this album will go down as a fan favorite next to Painkiller when this is all said and done. I can’t get enough of this album at the moment and I suspect the majority of Priest fans feel the same way. Check’em out on tour this summer as they bring the firepower along with Saxon; it’s going to go down as a tour for the ages. 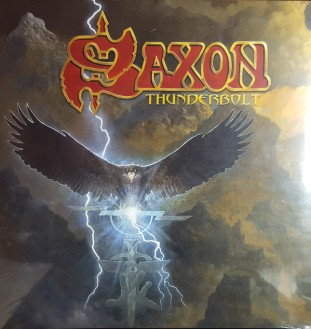 The mighty Saxon return with their 22nd studio recording; proving they still have the staying power to be relevant and vital as ever. The album entitled “Thunderbolt” forges ahead with 12 epic tracks of molten metal goodness; embracing that continual conviction of becoming denim and leather demi-gods from the NWOBHM.

This time out, the band go for that big epic sound to get you fist pumping and ready for a series of tracks that would put Manowar to shame. The ominous sounding instrumental (Olympus Rising) at the beginning sets the tone for the glorious first track “Thunderbolt’. The lyrics touch upon the gods of ancient Greek mythology, but the razor sharp riffs are spot on in support of this rousing number. “Secret Flight” continues on in a similar vein covering the exploits of Icarus in support of the gift of flight. There is a great deal of melody here and the riffs soar throughout; proving this number is a great compliment piece to Thunderbolt. I really enjoyed the creepy and monstrous “Nosferatu (The Vampires Waltz)”; as the sonic proceedings slow down, but the ominous textures really drive this number.

The thunderous attitude picks up again on “They Played Rock and Roll”. The track motors along at a great clip and at times feels like it could have appeared on 1981’s Denim and Leather album. I really got into “Predator” after the meaty riffs pounded holes in my eardrums. There’s an underlying death metal esthetic here, which might be a first for this band, so who says musicians mellow with age! “Sons of Odin” get back to that Manowar vibe and man do they let that rip loud and proud. This is also the track that Biff Byford shines best on vocally for my tastes, so move over Rob Halford – here’s another front man who can still belt out those tunes for his age. “Sniper” is a simple foot stomper that doesn’t let up for the duration of three and a half minutes. The riffs push the song to a satisfying finish; so if anyone is looking for a standard metal tune then this is it.

“A Wizard’s Tale” is a track that explores the boundless magic found in the tales of Camelot. The track strives to maintain the melody and it proves to be a descent number. Slotting “Speed Merchants” next is a stroke of genius as the prototypical thunder roars into life as a rancorous affair of riffs and a chorus that will surely get everyone in the moshpits going ape-shit over. “Roadies’ Song” pulls back on the reigns a bit; detailing the life of a roadie, but it’s a little on the dull side for my liking. The album ends on a return to “Nosferatu”, but entitled the raw version. I’m not sure this track is necessary, but it’s still a satisfying number. That riff that roars to life in the final two minutes of the song is still sweet music to my ears.

I was reading a few other reviews online and was a bit surprised that some find this album to be a serviceable heavy metal record at best. Personally for me there is a lot more going on here then what you would find in most young bands of today. Yes, Saxon is old boys still plying their trade to the heavy metal arena, but they are so prolific doing it that you can’t deny their contribution as a musical entity. I dig them still after all these years and Byford and the boys still know how to cut killer tunes to satisfy my heavy metal cravings.

Thunderbolt won’t disappoint and if you are digging the brand new Judas Priest record, then give this release a spin too. In fact Saxon and Priest are hooking up for a tour together this summer and it promises to be an epic affair. I’m giving this record eight thunderbolts out of ten and I can’t wait to hear these tunes live at some point this year.